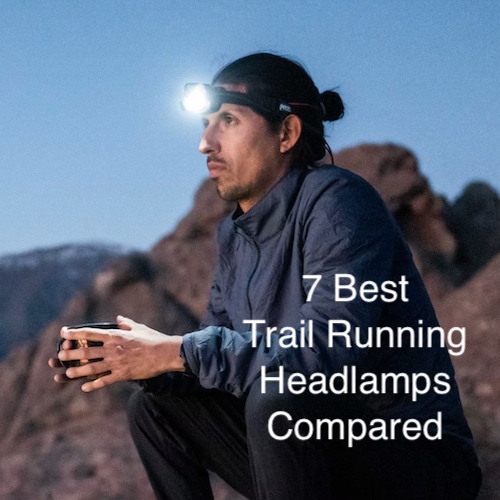 Trail runners need headlamps that are tough, have great battery life, and have perfect beam shape and color balance for running technical trails at night. The following 7 headlamps are used by trail runners across the globe and are evaluated on 21 criteria so you can see clearly which features each has. Don’t leave your choice of trail running headlamp up to chance or a flip of a coin!

We compare 7 of the best trail running headlamps on 21 different criteria to help you choose the right headlamp for your running needs.

Some of the criteria we used above in the chart will be important to you and others won’t. One of the things that bothers us about headlamps is the battery life never seems adequate, does it? Especially for ultra running. Ideally we’d have an ultralight headlamp and battery that could last at least 12 hours at full brightness, maybe 500-600 lumens would be enough. No headlamp has that. But, we’re getting closer.

If you look in the chart you’ll see one criterion labeled Pass Through USB Power. That means you can connect ANY rechargeable battery with a USB cable directly to your headlamp and run it. Battery size and strength just became obsolete with that move by Petzl. I reviewed another headlamp recently, the Fenix HM65R which also allows pass-through power for the headlamp. That one could be another alternative for ultra-runners if this feature is very important to you for long races or training runs.

Another thing I want to cover here for ultrarunners and other people who use their headlamps for many hours at a time is RL. Reactive Lighting is Petzl’s proprietary lighting solution that extends battery life and also cuts down on the wearer’s eyestrain.

The goal of the technology is to give just enough light as needed, and save the batteries for providing more light later. It works extremely well. The headlamp has a sensor which measures light coming back toward the headlamp. It assumes that the more ambient light coming back, the less it has to output so it dims the brightness a bit when more light is present. Keep in mind, this means the light the headlamp itself is giving out as well.

RL automatically and magically adjusts the headlamp brightness level to the correct brightness on the fly – instantly. It’s super fast and you’ll probably enjoy this feature if you run at night. The Petzl SWIFT RL, SWIFT RL PRO, NAO+, IKO CORE, and NAO RL headlamps all have this technology. In practice, it extends battery life around 300% of what it would be if constant lighting was used.

Recently a few companies – Petzl, AceBeam, NiteCore, and Fenix have implemented another nice battery feature where you can now charge your phone from your headlamp battery in an emergency. Everyone admits the phone is more important than a headlamp, and they’ve finally started to give us this tech. The strongest battery we have in the headlamps above is a 5100 mAh proprietary battery by AceBeam. When charged fully it will give you the most power for your phone.

Ideally you’d want to run with a headlamp that was 100% waterproof and impervious to water and dirt. In the real world, we don’t have that yet, but the AceBeam H30 and the NiteCore HC65 come close. The problem is, they are entirely front-mounted units with all the weight in the front. Some people can still use them for ultra-running. Others must have a lighter unit, or better balanced unit.

The headlamp worn most in long-distance ultra-running trail races has been the Petzl Nao+. It is not fully waterproof, but most people will either use it anyway and hope for the best or many people will cover it with a hat or a plastic bag in severe weather. To be honest, the comfort of the NAO+ and the soon to be released NAO RL make them very hard to beat for ultra-running on the trails.